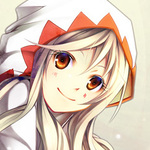 I knew that I'd find you snoozing around here. (Kairi)